skip to main | skip to sidebar

Danvers State insane Asylum was the king of the abandoned insane Asylums in the 80s and 90s, a huge hulk of a building oozing atmosphere and mystery.
People I've spoken to who were lucky enough to go inside the place have decribed it as the most beautiful building they'd ever seen. It's imposing tower, and 'bat' layout, with two huge wings stretching off either side comprising of wards and treatment rooms. Legends of the 'snake pit' where dangerous patients were kept, it must have been incredibly imposing. 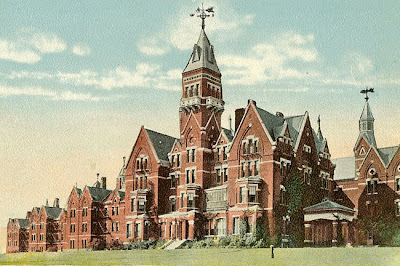 Danvers is believed to have been the inspiration for the infamous Arkham Sanatorium from H.P. Lovecraft's "The Thing on the Doorstep" which was in turn inspiration for Arkham Asylum from Batman 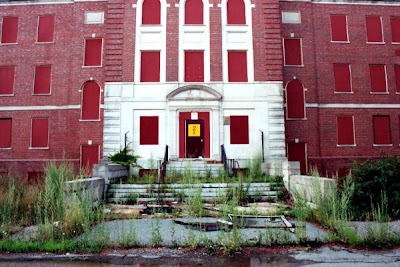 Built in 1878 due to a high demand for beds, with other Asylums in New England over capacity and Mental patients housed in any beds that could be spared in other hospitals. Its location was extremely rural and 'out of the way' as with most Asylums. Its main purpose was to provide residential treatment for the mentally ill, Danvers expanded to include a training program for nurses and a Pathological research Lab, by the 1920s there were even school clinics to help determine mental deficiency in children. In the 1930s and 40s the Hospital was extremely overcrowded and there were stories of inhumane lobotomies, drugs and restraints being used to control the overrun population.


The population of the hospital was decreasing by the 1960s and as other methods of treatment and 'care in the community' were being used, this lead to the closure of Danvers in 1992 along with budget cuts to the mental health system.


The hospital holds a place in folklore for the locals, many believe it to be haunted and refer to it as the 'castle on the hill'. The History of the ground lends itself well to the paranormal, Jonathan Hathorne the most fanatical judge during the witchcraft delusions of Salem, who was responsible for the deaths of many innocent people, lived in a house which stood on the site of the hospital.
There are countless stories from people who claim to have experienced the paranormal happenings in the hospital site. The police and security kept the place in lockdown and it was always stricktly 'off limits' which made it an even more desireable a place for thrill seekers to try and visit. 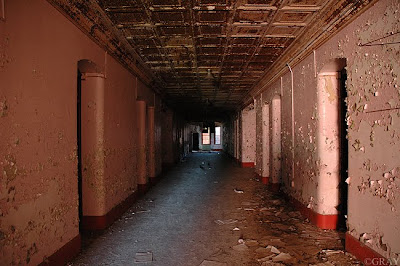 "I don't know whether the feelings get trapped in the walls or the building - but they just stick there. There have certainly been enough bad things that happened there that it will stick around for awhile."
- Salem resident 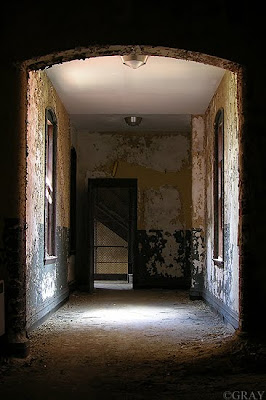 " I just felt a very intense foreboding; you could feel there was a lot of pain there" - Salem Resident

Horror film 'Session 9' was filmed there in the 90s and actor Peter Mullan claimed to have heard someone wisper his name. and another crew member saw a figure walk past a window.

J- What was the worst incident you witnessed involving a patient?
P-Back when they started dual diagnosis they transferred this 15 year old boy from Hogan to DSH. This boy had a habit of crawling into heat ducts. The heat ducts don't go anywhere at Hogan, it's a newer building and you can't get hurt. Anyway they sent him up and he was up there for about 3 weeks and he disappeared. We searched everywhere for him. We looked all over and we couldn't find him. The staff over at J ward started to notice a horrible smell getting worse and worse everyday. Anyway to make a long story short, he got inside the duct work in J Annex. The duct work in DSH goes right down to heating coils. He slid down , couldn't get up , got trapped and died. His feet landed right on the coils and literally burnt off up to his shins. I was there and had to go over there and help cut him out of the wall. There must of been 25 people in that room that day. The Medical Examiner, clinicians you name it. I cut the wall and Butch (The Tinsmith) was there to cut the tin duct work. When we cut through it all, and opened it up the kid was right there and looked almost frozen. The pathologist reached in to take him out and his hands sunk into his chest like jello.The smell was disgusting it was a nasty stench and we all got sick. His death brought on a major,major state investigation. His parents were mad as hell and rightfully so. We had big wigs from Boston and the State Police lab up there for weeks. It was just an horrible experience. I've seen a lot in my 24 years and that was by far the worst.


J-Do you know who was in charge of buring the patients in the past?
P-Horace Clark and his crew was in charge of burying the deceased. I remember a couple months after I started they needed me to build a wooden box for a patients leg that was in the freezer over in the morgue. They operated on this man and he died. They had a funeral for him and he was buried but they kept his leg probably for further research. He was buried for about a month before they buried his leg next to him. I remember feeling weird about the whole thing, it was sort of bizarre because I just started the job. The old carpenter Eddie Osborne calmed me down and said "it's just a box, you're building a box that's all" and I built it , Horace's crew picked it up and placed the leg in it and they went and buried it. To the best of my knowledge that was the last patient buried there.

J-What are your feelings when you hear the hospital being referred to as this snake pit and this haunted castle?
P-In all honesty, I believe that the patient care was better at DSH than some of these half-way houses that are around today. They had recreation for the patients, entertainment for the patients, movie theatre, dancing, arts and crafts. They also had what was called industrial chores and patients could work in the woodshops, work with leather, make furniture and the patients loved it. I'm not saying it was perfect because there was bad staff and bad things did happen but that goes on at every hospital and at every business you work in. It certainly wasn't a snake pit. The public wants to believe it was because it has that mystique and the architecture gives you that impression. I mean there were dirty wards. That's no secret. We'd refer to C Ward as Shit Ward because patients wouldn't keep their clothes on and they soil themselves. They'd hose them down but it's not like what you read in books with staff blasting them with a fire hose with ice cold water and whipping them while being hand-cuffed together. That's just absurd. They'd hose them down to get the feces and urine off of them but it wasn't abusive. For the most part, the staff loved their patients. They'd bring them special treats, take them out for rides and take home for dinner. I had this patient by the name of Byron over in this very house many times for dinner. Byron worked with me for years and you get to know these people and care for their well being. We had patients sobbing in tears when they were closing the hospital. It was their home and didn't want to leave. Overall, the hospital was a good place and the staff did an excellent job with what they had.


Danvers was eventually demolished and turned into flats, named Avalon Danvers, the site, it seems has continued to have a bad atmosphere. Part way through the construction there was a mysterious fire that destroyed a lot of the building.
There have also been numerous complaints from residents of the flats of awful management, noisy flats and badly maintained apartments.
It seems that site in Danvers will never be free from bad press.

Visit the Danvers Hospital website for loads of pictures and information
Posted by Ruby at 15:25

Ruby
Artist, Illustrator and Collector. My work is inspired by The Macabre, Childhood, Social history, and old Folk and country music. I am a collector of old photographs, dolls, and objects of interest. I am Also interested in Vintage medicine, mental health care, true crime and Attitudes towards death, mainly in Victorian society. I Graduated from Hereford college of Arts with a BA honours in Illustration in 2010. I work mainly in Digital form, or pen and ink, and watercolour. Here on Glasseyes I post a mixture of my work and inspirations, A mish mash of Original Images and research, everything that makes me tick.

Promote Your Page Too